Sir Robert Baden-Powell (BP) started Scouting in 1907 in England with an experimental camp for boys on Brownsea Island, followed by the publication in 1908 of his handbook, Scouting for Boys. From those events, Scouting went viral and soon became a worldwide boys’ movement. In 1910, Baden-Powell responded to demands from girls for a similar movement and created the Girl Guides Association which was developed by his wife, Olave. During the First World War, in 1916, BP started the Wolf Cubs for younger boys, then ages 8 to 11, and, at the end of the war, in 1919, the Rover Scout program was introduced for young men over 18.

Scouting came to New Brunswick in 1910 when the first Scout groups were formed in the Province and, by 1914, there were 323 Scouts reported in NB, rising to 858 in 1915 and 893 in 1917. The years between the two world wars (1918 to 1939) saw New Brunswick take the lead in developing Scout programs. John Stiles, an engineering professor from the University of New Brunswick moved to Ottawa in 1919 and became the first Chief Executive Officer of the Boy Scouts’ Association, a position that he held until his retirement in 1946. Scouting in New Brunswick originally developed as a bilingual movement with active groups in both English and French New Brunswick and with handbooks printed in both English and French. 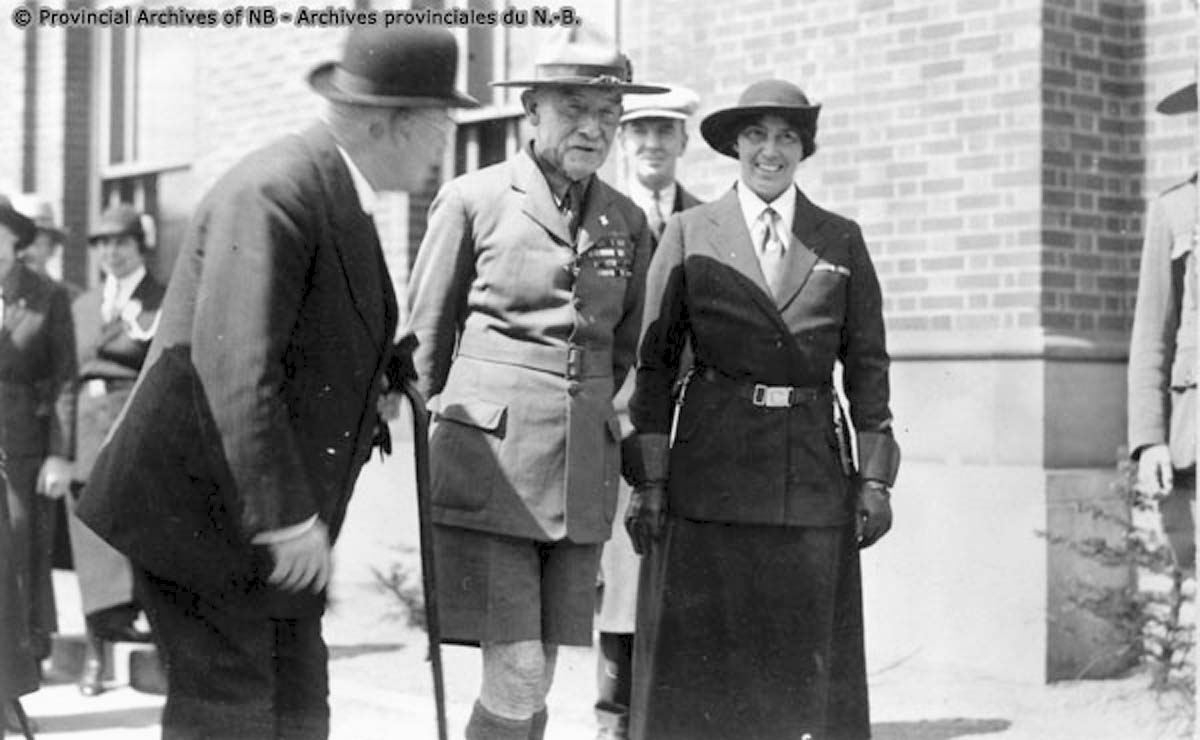 In 1932, the first Apple Day in Canada was held by New Brunswick Scouting. This came about because, in the 1920s, the provincial government had provided a grant to support Scouting but, with the stock market crash of 1929 and the beginning of the Great Depression, the grant was ended, and the Scouts had to find their own way to raise money. The first New Brunswick Rover Moot was held in Minto in 1937 with 111 Rovers attending.

While Scouting membership declined during the Second World War (1939 – 1945), it revived after 1944 with the appointment of Saint John optometrist Eli Boyaner as Provincial Commissioner. Boyaner hired J. Percy Ross, another Saint John native, as the first Provincial Executive Director in 1945 and the two of them provided dynamic leadership to New Brunswick Scouting for the next twenty years. Boyaner retired in 1964 and Ross became Executive Director in British Columbia in 1961 before moving to Ottawa in 1967 to become the Chief Executive Commissioner for Canadian Scouting until his retirement in 1981.  Ross was succeeded by Herb Northcott as Executive Director in New Brunswick.

The years from 1945 to 1965 were the glory days of Scouting in New Brunswick, as they were in the rest of Canada. Membership grew steadily, leader training was extensive and highly professional, the program took full advantage of the New Brunswick outdoors, and the province took on the challenge of hosting the 2nd Canadian Rover Moot in 1956 and then the first provincial Scout jamboree at Island Park in Woodstock in 1958. Large New Brunswick contingents attended the Canadian jamborees of 1949 and 1953 and the 8th World Jamboree at Niagara-on-the-Lake in 1955. Starting in 1950, holders of the King Scout, after 1953 the Queen Scout, and, after 1969, the Chief Scout Award and Queen’s Venturer Award, were presented to the Lieutenant-Governor for recognition at a ceremony in the Legislative Assembly.  Starting in 1953, an annual provincial Scouters’ Conference was held in one of the cities of the province. It was an age of creativity and imagination, encouraged by Boyaner and Ross.

Times, however, had been changing in Canada. In the late 1950s, there was a movement within the francophone community to establish a more autonomous Scout organization in French Canada, La Fédération des Scouts Catholiques. While there was resistance to dividing Canadian Scouting, La Fédération went its own way in 1961 and francophone New Brunswick went with it, leaving behind the Anglophone community and those francophones, particularly in the Bathurst area, who deliberately stayed in the Boy Scout Association.

In the decade of the 1960s, with the increasing urbanization of Canadian society, many people wondered if Scouting was really meeting the needs of urban youth. With changes in the schools to make the schools more student-centred and less hierarchical, people started to reexamine the Scout program.  It was noted that many Scout troops were run hierarchically by ex-military men, that one of the big problems was how to retain the older boy in Scouting, that boys of 12 do not have a lot in common with boys of 17, and that frequently leadership in the Troop was given by older boys to much younger boys. This being the case, a new Scout program was developed, which was approved by the National Council in 1967. This program intended to make the Scout program more boy-centred and less program-centred and called for boys to work in patrols with others of similar age, where they could decide on their program with the help of an adult counselor, from an array of badge alternatives, rather than the previous programmed march through Tenderfoot, Second Class, and First Class requirements to Queen Scout. Many of the new badge alternatives looked to badges that reflected an indoor urban environment more than the traditional emphasis on the outdoors. This program started in 1968 as Scouts 68.

Because of the need for boys to be in groups of similar ages, it meant that there was to be a new Venturer program for boys from 14 to 17, while the Scouts were to be restricted to ages 11 through 14. This change came about in 1969 with the change of the Scout age-limits and the introduction of Venturer Companies for older youth.

In the early 1970s, a fifth section was added to the existing Cub, Scout, Venturer and Rover sections in Canada with the invention of the Beavers, a group for children between the ages of 5 and 7. Before long the Beavers were the largest section in the movement and their numbers tended to offset falling populations in the older sections.

In 1971, Rover Crews were allowed to admit girls and, in 1984, Venturer Companies could also decide to have female members. In the 1980s, Canadian Scouting hoped to amalgamate the Scout and Guide movements as had been done in Europe, but negotiations failed when the Girl Guides insisted on remaining as a single-sex organization. Canadian Scouting then moved to become a coeducational movement itself. From 1992, individual Scouting groups could decide to accept female members and in 1998, this was followed by a national decision that required that all sections of Scouting be coeducational. This meant that the 1914 act of Parliament which incorporated the Boy Scouts Association had to be amended, as it was in 2007 when the name of the organization was changed to the gender-neutral Scouts Canada.

In 2002, a national reorganization of Scouts Canada into a corporate model removed the previous distinction between uniformed and non-uniformed volunteers; all volunteers now were committed to providing program, training and servicing and many aspects formerly handled by Scouting districts were handled by Scouts Canada nationally. Instead of ten provincial Scout councils in Canada, twenty new councils were created, with one in each of the provinces of Newfoundland and Labrador, Nova Scotia, New Brunswick, Prince Edward Island, Quebec, Manitoba and Saskatchewan, two councils in Alberta, three in British Columbia and eight in Ontario. The local Scouting districts in New Brunswick were abolished after 2002 and replaced by new and larger Service Areas: Chaleur, Fundy East, Miramichi, Rivorton, Southeast NB and Wabanaki.

In the 21st century, there has been new commitment to membership growth and, in 2012, Scouts Canada introduced a new emphasis and concern for child and youth safety, with enhanced screening and training for all new volunteers.

In 2007, the centennial of the Scouting movement was celebrated across the world.