Prior to the introduction of The Canadian Path, our Cub Scout Pack operated on a 3-year cycle of activities that included the Space Exploration badge. My wife (who happens to be a retired science teacher, and who taught space as one of her units in school) was an excellent resource to have. Last year, as we introduced The Canadian Path, the Cub Scouts sadly did not choose this activity. This year, one of our Howlers visited the Kennedy Space Center with his family in the fall. While the Cubs were planning their fall program cycle, he convinced the Cub Scouts that the Pack should reserve the Cub Scout Space Exploration Kit from the Oakville Scout Shop. We already have many STEM resources within the Pack, but the kit contained many additional resources and ideas.

At the Pack’s first space-themed meeting, the Cub Scouts were each given their own blank Tyvek “space suit”. The Cubs used coloured markers and added all the needed accessories and equipment. They even designed their own mission patches with inspiration from the sample patches in the kit. 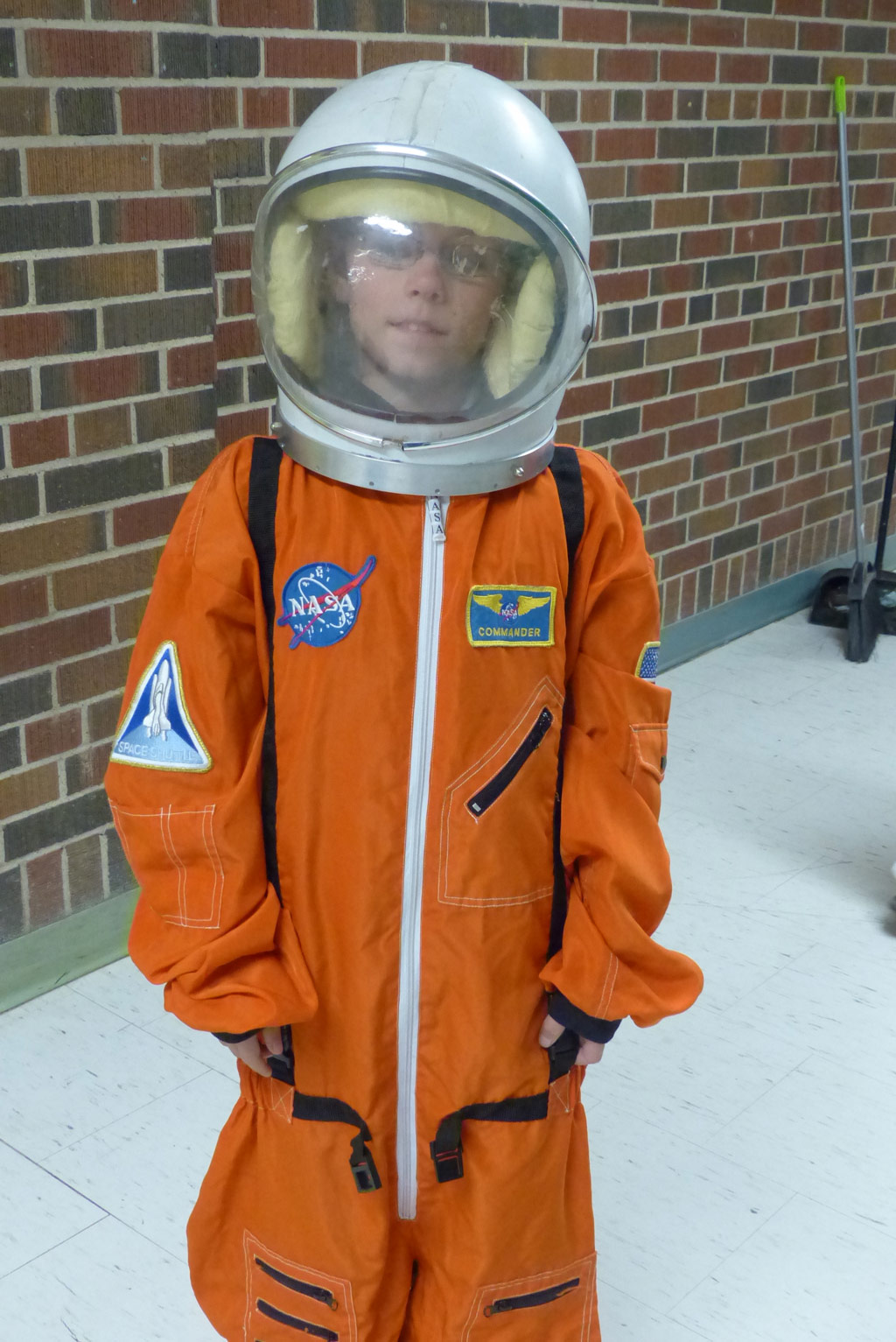 The Cubs also did piloted and unpiloted space exploration exercises. The Cub Scouts (and even some of the Scouters too) loved the walkie-talkies! We met in a school gym with a stage. The planets were placed at the back of the stage. The Cub Scouts were at the back of the gym. Each of our two Lairs got a piece of Bristol board with five circles on it to draw what they could see, first with the naked eye. On the second circle, they drew what they could see with the use of telescopes and binoculars. Each Lair then elected one Cub Scout to be an unmanned satellite. Answering yes-and-no questions, the Cub Scout provided information that the other Cubs in the Lair used to draw what they understood the planet should look like on the third circle. Finally, the astronauts (also elected) described by walkie-talkie what they could see. The rest of the Lair used the information they provided to fill in the final two circles, one of which was used for the front of the planet, the other for the back.

We found that this activity could have taken place in a much wider area (outside, for instance), to allow the Cub Scout playing the unmanned satellite the opportunity to “orbit” the planet and see it from all angles, and not just at the front of it.

At the Pack’s next meeting, the Cubs began to explore rocketry. First, they learned about propulsion with the use of balloons, and the Cub Scouts quickly realized they could not control the balloons. They then made paper rockets that they could launch from our Pack’s rocket launcher. (A friend had made the launcher from spare plumbing parts and a retired propane tank converted into an air pig. We got the idea for this from a Boy Scouts of America display we once saw while visiting the Johnston Space Centre in Houston, Texas.) The Cub Scouts found that if done carefully, they could bounce their paper rockets off the ceiling of the gym! In the past, we have even had them get stuck in the lights!

The next meeting was all about astronaut training. We supplemented the gloves in the kit with dishwashing gloves that had been duct-taped onto lengths of plastic dryer venting, so that the Cub Scouts could experience the gloves and arms. In the past, we cut holes in cardboard boxes through which we inserted the gloves and arms to do the various tasks. Instead of the hand pump for the water-cooled underwear activity, we used a polar cube, obtained for recent shoulder surgery. This device circulates ice water though a pad which is similar in design to the actual thing—just not quite as cold! 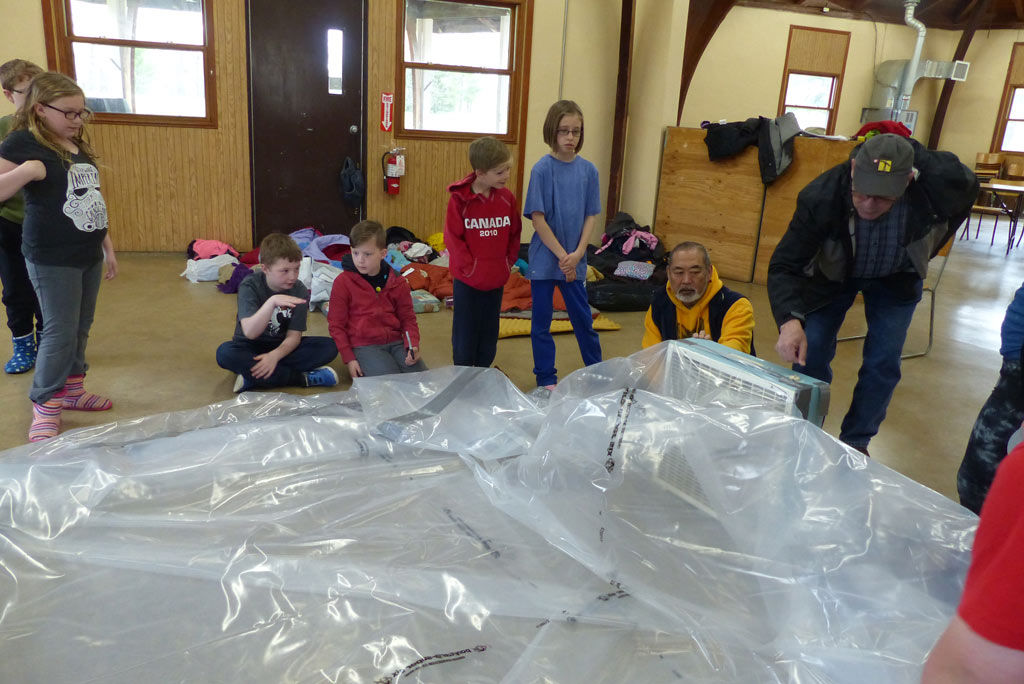 At the next meeting, the Cub Scouts designed and built their own space stations or satellites. They used a lot of scrap material, including water bottles, paper tubes, aluminum foil, cardboard sheets and other items. They also finished their space suits and modelled them with their space stations/satellites.

At the Pack’s spring camp, the Cubs built one module of the Inflatable Space Station using super 6 plastic and duct tape.  The Cubs used a box fan to inflate the station. We are not sure who was more shocked as the station inflated, the Cub Scouts or the Scouters who supported them! The Cub Scouts loved their creation. It became the go-to destination of the weekend, and it even became a hiding spot for one Cub Scout when it was his turn at dishes! Thank goodness it was made of clear plastic; his efforts at concealment were, well, transparent. The Cub Scouts insisted that we set up the space station the next day so that their parents could see it (and visit it) when they arrived to pick them up. (After the weekend, a friend recycled materials from the space station when building a greenhouse.)

In the afternoon, each Cub Scout decorated his or her own plastic pop bottle rocket and launched it. They had a great time.

The Cub Scouts had a variety of favourite activities. The Cub who had been to Kennedy Space Center enjoyed building his own model rocket the night we built space stations and satellites. Another enjoyed building his own custom space station. The Cub Scouts even said that they even learned from their failures, just as NASA learned from its own mistakes in the early days of the space race. The Cubs all loved the inflatable space station and marvelled at how astronauts lived in such small spaces for a very long time.

We have told other Cub Scout Packs about our experiences with the kit and have encouraged them to use it. In a few years, we will tell the new Cubs in the Pack about it and encourage them to use it again.

The Right Place, the Right Time and the Right Footwear!
Safe Scouting

The Right Place, the Right Time and the Right Footwear!

Scouts Canada – December 16, 2016
Why the Queen's Venturer Award is important to me
MyAdventures Blog

Why the Queen's Venturer Award is important to me

Scouts Give Back Over the Holidays