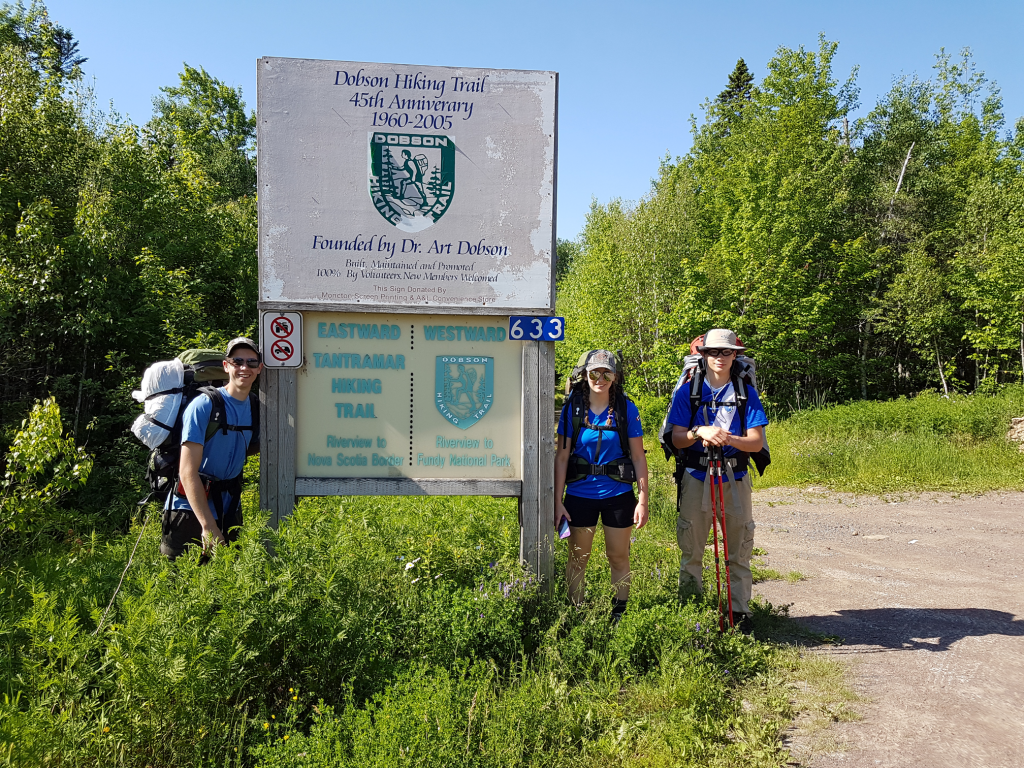 On June 27, our Group left Saint John shortly after 7 am, heading to Riverview, New Brunswick. Our Group consisted of Venturer Scouts Cameron Arthurs, Kayla Williams and David Fox along with Company Scouters Aaron Parker and Rick Swan. We left the truck on foot shortly before 10 am once we reached the trailhead. Approximately ten kilometres into the hike, we stopped for lunch at a large bog in big meadows. It was not our preferred location to stop; however, the hot sun left us parched and in need of water. (Unfortunately, the bog water we filtered to replenish our water supplies and cook lunch reduced the flow rate of our water filtration device. This slowed our progress significantly for the next few days.) After lunch, we completed a round trip of the Sand Hill Side Trail and continued on until we reached the 19.8-kilometre marker on the trail. We found an excellent site to set up camp near a brook and decided to stop for the night.

The following day started with many dirt roads. Only a few kilometres past our campsite was a logging road that we followed for roughly 7 kilometres. The terrain began to get very hilly, and we walked past many logging operations. While walking, we began to hear a loud whooshing sound. We slowly began to make out the outline of windmills, and we soon found out we were walking through the Kent Hills Wind Facility. After lunch, we stopped at the Beaverbrook Cabin, where we discovered a journal left there for groups coming through to log their adventure. We made sure to take this opportunity and briefly wrote about our trip thus far. While walking later that afternoon, we ran into a black bear. Our plan was to stop for supper, but the sight of the bear kept us hiking at a steady pace for another 6 kilometres. We finally stopped for supper at the Kent Road, around the 41.7-kilometre marker. Locating Blackwood Lake on our map, we pushed through to this lake, which is where we spent the night.

We awoke the next morning to a torrential downpour. We left Blackwood Lake after waiting out the rain. By the time we hit Collier Mountain Road, the rain started again and we contemplated turning back. We decided to keep going, since we hadn’t hiked the two days before just to turn around and not finish. When we made it to the end of the Dobson, we ate lunch and took a well-deserved break. Approaching the end of the trail, the terrain was very swampy, considering all the recent rain. Close to the end of the Dobson Trail, we walked through a sugar bush with trees tapped into overhead tubing. We stopped again at the Collier Mountain Road, and waited for our correspondent to drop off some supplies—including a new water filter! After receiving our supplies, we trekked back to Blackwood Lake for the night.

Upon early awakening, rain was still falling quite hard. After eating breakfast and tearing down our two-day campsite, we left Blackwood Lake. After all the rain, all the dry, dusty dirt roads that we had travelled on day two were immensely muddy. We stopped at the 37.9-kilometre marker—away from the start point—for lunch, and completed the Hayward Side Trail immediately after. The trail consisted of all road, but was a rather steep grade. After recuperating from the Hayward Side Trail, we pushed hard, seldom stopping, to reach a clearing that would be optimal to stay for our fourth night. This was a clearing at 25.1 kilometres, where an old farmhouse had been burnt. Its old stone foundation shared the overgrown clearing with some gnarly old apple trees. Thanks to a nearby brook, those members who wanted to were able to bathe. Despite the cold, it was refreshing.

At 5:30 in the morning on Canada Day, our earliest start yet, we embarked on the last leg of our journey. We walked back through the wind farm and got pictures from a clearing near the highest point on the hike, overlooking the wind farm. We stopped at the same bog in the meadows to eat lunch. A few kilometres before, we stopped briefly to filter water at a clear brook instead of the bog. We’d learned our lesson! All Group members had to dig deep to complete the last twelfth of the journey due to fatigue and consistent, above-ankle mud that inhibited our progress. We reached the origin of the trail at approximately 4:30 pm. Scouter Aaron continued to obtain the vehicle, and the remaining members took a well-deserved break.

Together, we left Riverview and stopped for supper at the Salisbury Big Stop, where we were exposed to the first non-dehydrated food that any of us had eaten in five days! The last member of our group dropped the others off at home, back in Grand-Bay Westfield, around 7 pm Friday night, just in time to participate in the Canada Day festivities.

Adventures in the ‘concrete jungle of Toronto’
Group Growth

Adventures in the ‘concrete jungle of Toronto’

Scouts Canada – January 11, 2018
Getting Involved in Scouting and What It Means to Be on the Canadian Path
MyAdventures Blog

The Right Place, the Right Time and the Right Footwear!

How Safe is Your Meeting Place?

Staying Safe while on a Hike

Be Alert and Prepared: Near Misses