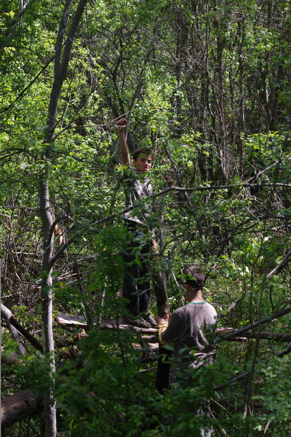 Three of us were working towards our Chief Scouts Award in 2014-15, so we planned a Scout-led activity that incorporated everyone from the 166th Blue Quill Troop. It was our version of Mantracker, taking place at Camp Poole located at Lake Wabamun in Alberta.

Using maps, we chose our campsite as a starting point and set the finish line at an old cabin two ridges away. There were multiple trails that ran through a heavily wooded area that the teams could utilize to avoid the Trackers (aka Scouters). Also, each team had a map and a compass to help them navigate.

When we arrived, we had to amend our initial plan. The forested area was actually large enough for a Beaver, Cub or Scout to get lost in, so we reorganized the teams so that there was either a Senior Scout or a Scouter included, and everyone carried a whistle and or a walkie talkie. If you were caught you became a member of the Mantracker’s team.

The adventure began, teams were given a head start and they were off and running. 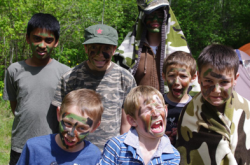 The posse was growing but we had a strategy to use other teams as distractions to sneak by the hunters. We would run and hide, working our way towards the finish line. We had to retreat further than we wanted and ended up behind the cabin, but that let us approach the finish line from a direction no one would be expecting. It worked like a charm, we made it safely to the porch of the cabin and gave high fives all around that we had won. We sat down to wait for the surprised hunters to show up and see that we had slipped by them. Eventually a small groups of hunters trickled in until everyone was there.

Everyone headed back to the campsite for snacks and hot chocolate, and that was when the headcount revealed that three Scouts were unaccounted for—so the hunt was back on!

For the Mantracker event, the Plan worked well, the Do was a blast, and in Review I learned that we should have sounded a horn or signal at the end of the Mantracker Adventure so that any outlying Scouts would know to come back and not wait to be found—but you can never have too many winners, and the view was great!

A Scout's Guide to the Ultimate Summer Camping Trip

Scouts Canada – June 21, 2019
This Giving Tuesday, give ‘Thanks’ to those who have made Scouting possible for you
MyAdventures Blog

One Hundred Years of Doing Our Best!

Board Members Katie Beers and Robert Craddock – January 16, 2018
A Swim around the Pond
Beaver Scouts