“It was one of the happiest moments of my life,” said former Scouter Ken Knowles, as he recalled walking into a room and seeing his 6th Nanaimo Venturer group from 35 years ago. “I was overcome by the sheer joy of seeing everyone together again,” he said.

In the mid-1980s, Knowles led a unique group of Nanaimo teens in Scouting. They were from diverse socio-economic backgrounds, but most were involved in their school music programs and came together under the Venturer banner to form rock, jazz and Dixieland bands for fun and for fundraising.

Knowles led them on adventures including a week-long bicycle trip down the Sunshine Coast on the mainland of British Columbia, and a canoe expedition to the Broken Island Group off the west coast of Vancouver Island. Those expeditions helped many of the members earn silver and gold Duke of Edinburgh awards, and the Queen’s Venturer award. 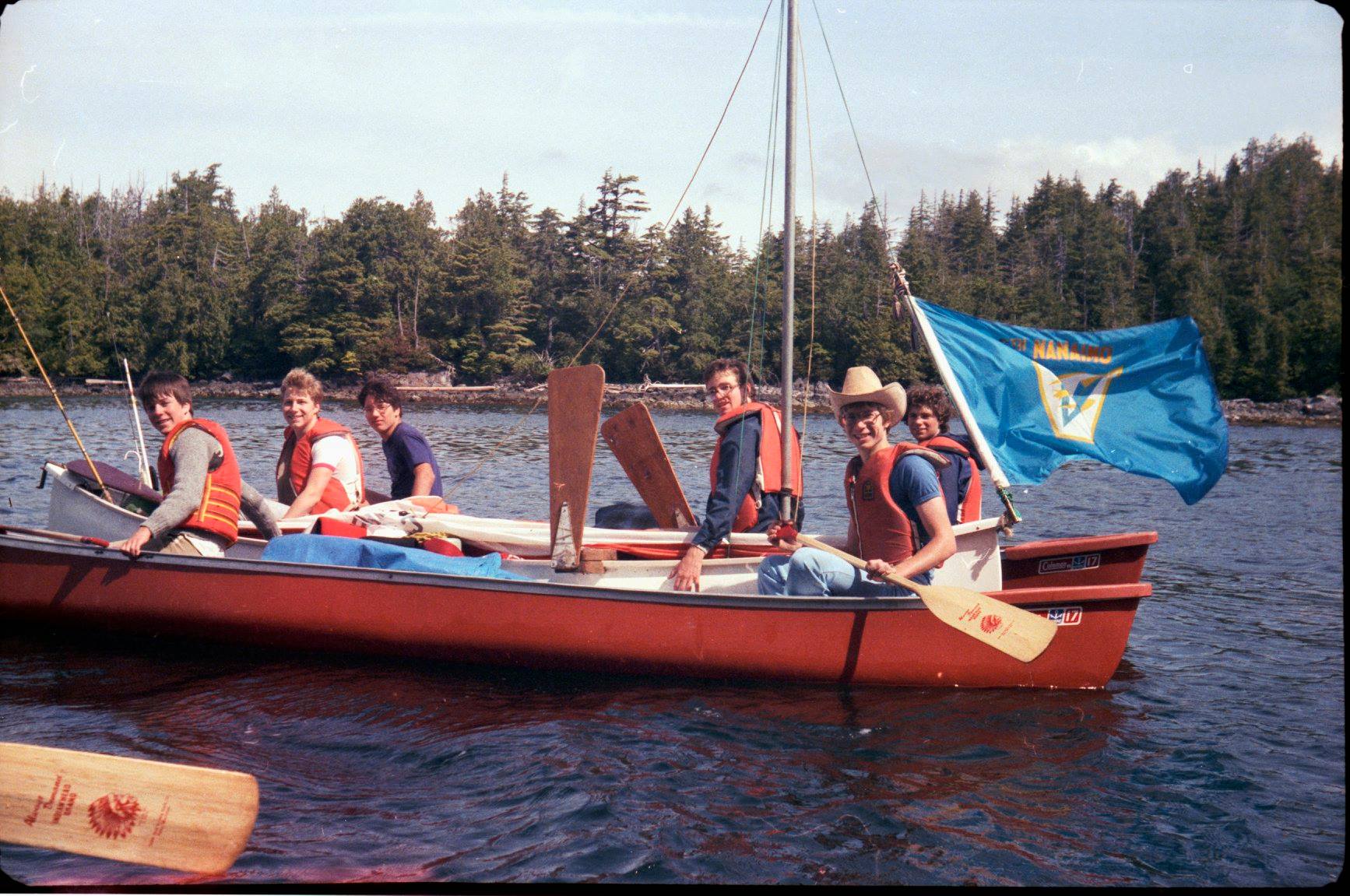 When the teens graduated high school, they split off in various directions. Decades later they began to find each other again through social media—mainly Facebook. Knowles, now aged 79 and living in Victoria, also joined Facebook and began reconnecting with many of his former Cubs, Scouts, and Venturers.

Through the various threads and posts, it was obvious how much Scouter Ken meant to the boys he had helped mold into men, and also how much these men meant to Knowles.

They formed a secret Facebook group in the summer of 2018, and within a few weeks had organized a surprise reunion for Knowles in Victoria, with the help of is daughter Kelly. 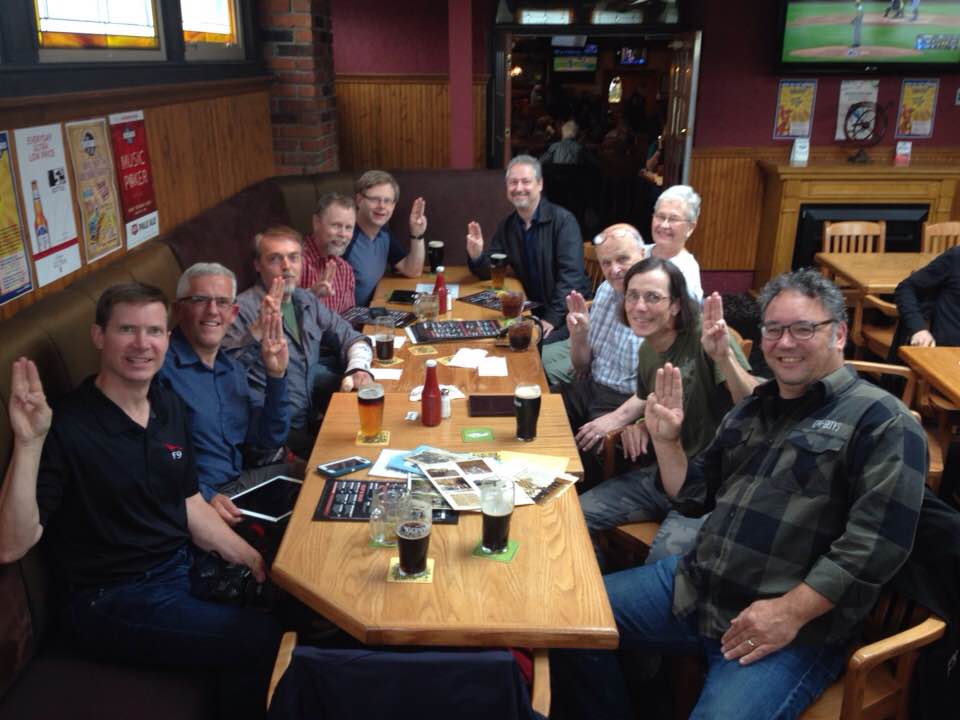 The former Venturers – many of whom hadn’t seen each other for 35 years – travelled from Ontario, Alberta and Japan for the event.

“You came into our lives during a really important time – just as we starting to become young men. It was our last chance to be kids and our first chance to start taking responsibility for ourselves,” said former Venturer Jason Keel, now Supervising Story Producer at the Discovery Channel. “You treated us with respect, openness, and kindness, but most of all you treated us as equals. I think of you not only as a mentor, but as my first grown-up friend – the first adult to treat me as an equal.”

While Keel wasn’t able to attend the reunion in person, he posted a video for the reunion.

The boys of 6th Nanaimo had grown into an impressive group of men: engineers, teachers, journalists, professional musicians, a software developer, an environmental activist, and a space industry scientist.

“You guys were such an exceptional group with such an adventurous spirit,” said Knowles, who led Cub, Scout, and Venturer groups in Nanaimo for 10 years. “Even though volunteering at some things and wearing a uniform might not have been ‘cool’ with others of that age, you guys went along with the program and were up for anything.”

At the reunion, the men shared memories and stories from adventures that stretched from Edmonton to Tahsis. “I haven’t laughed that hard in a long, long time,” said George Hann, who moved to Tokyo to teach English soon after finishing high school in Nanaimo.

A few troop members have passed away over the past few years, which is one reason why the remaining members thought it was important to get together and let Knowles know how much he meant to them.

“I was just absolutely gobsmacked. What a wonderful experience,” Knowles said of the surprise reunion. “You guys haven’t changed. You’re still those 15 and 16-year-old guys to me, but I’m so very proud of what you all have become,” he said.

While most of the men had other mentors and role models over the years, they still share a common bond through Scouter Ken Knowles and the 6th Nanaimo Venturer Troop, which has sustained their lifelong friendship over distance and time.

About the Author: David Wiwchar was a member of the 6th Nanaimo Venturers and has been an award-winning journalist for the past 33 years in radio, TV, newspapers, magazines, and online publications. He lives in Port Alberni, BC with his wife Andrea, and is currently the Operations Manager and News Director at 93.3 The PEAK radio station (https://www.933thepeak.com/). 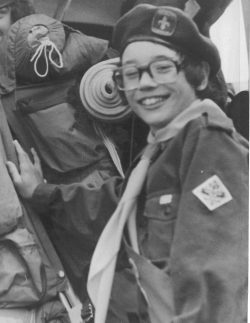 Youth-led – engaging youth in every adventure

Join Others Across Scouting to Prevent Bullying!

Scouts Canada – February 3, 2017
Allowing even more youth to benefit from Scouting by delivering a great program on the Canadian Path
MyAdventures Blog

Learning From Our Peers As Scouters

Safe Scouting is about planning ahead

A Scout is Prepared: Outdoors and at Home — Emergency Preparedness Week