We had a planning camp at the end of summer on 2017 at Starvation Lake and decided to go do the Bowron Lake Canoe Circuit for our big summer adventure in 2018. Over the following months we booked the circuit, planned the food, the drivers to take us there and the gear we would need. We did a two-night practice camp in June on the Indian Arm to test gear and get the paddling partners well matched, so we were well prepared.

However, with less than a week to go before our trip was scheduled, the wildfires throughout the interior of BC and the very poor air quality around that area forced us to change our plans. For safety reasons, we thought it better to enact a Plan B camp and canoe the Powell Forest Canoe Route on the Sunshine Coast instead.

We were already meeting on the Sunday before to make up the food for the trip. (We make our own dehydrated meals and do freezer-bag cooking; this saves weight and fuel and is better from a Leave No Trace perspective as we only boil water—no washing up.) We then sat down and thrashed out a plan to go to Powell River, and though we’d prepared for a different trip we easily adapted it to this one. We had packed our food in watertight buckets and had built some portage wheels from ABS pipe and cartwheels and some climbing straps. We were set to go. 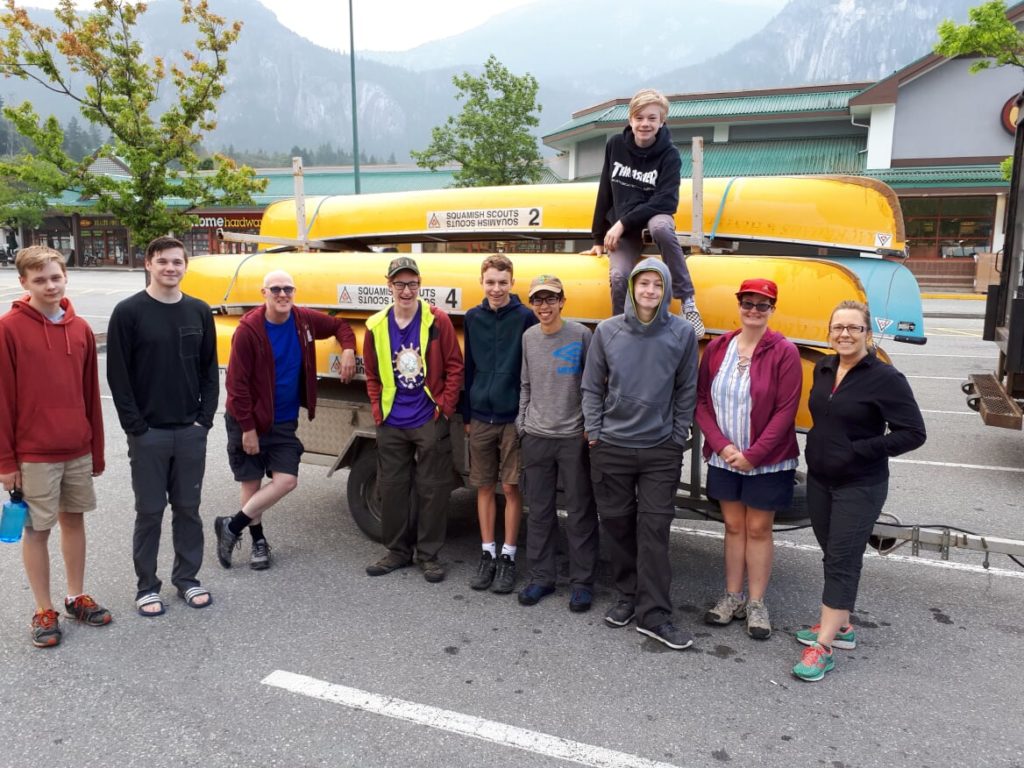 The circuit took seven days. (We added some more lakes to make the distance longer.) The paddling was mostly good and we had good weather; however, some of the portages were like goat trails! These were by far the hardest part of the trip—one of them took us six hours to get the five boats and all our gear across. Luckily, there were more trails we could use the wheels with than not.

We saw a lot of wildlife: bears, eagles and other birds. We could see the area had been extensively logged in the past, and as the water level was low due to it being late summer, we often found this had exposed an eerie landscape of tree stumps, some above the water, but many below. We had to negotiate our way through these and watch in case we hit one of the ones just under the surface, and we could see evidence of the slots cut in the stumps the loggers must have put their springboards in.

It was good to relax after a day in the canoes. The lakes made for good swimming.

At camp every night we made our food and explored the surrounding area. It was good to relax after a day in the canoes. The lakes made for good swimming. While there was a fire ban (meaning no campfires), we still chatted long into the evening.

We all agreed it was a great camp, though very challenging and much harder than we had expected. We knew we had planned and packed for a different trip, and if we were to do it again would change some things. We would have packed lighter, brought less group gear; we had four WhisperLiteTM stoves with us when we could have made do with two, and three cook sets when we could have done it with just two. There were lots of little things we could probably have done without, and we could have taken less bulky food (and fewer food packs). Having this extra gear as a backup made sense when we thought we were doing the Bowron Lake Canoe Circuit, as we always try to have backups in case something breaks down or is lost and when taking a bit extra was not a big issue. That being said, we had essentially planned for five days before we set off, and we were very pleased we could find an alternative rather than simply cancelling when it was clear going to Bowron Lake was not a safe option. We were divided on whether, if we did it again, we would bother with the wheels; they are heavy and not easy to carry, but we got to use them for more than half the portages. Having some of those really lightweight Kevlar canoes would have been nice. Our canoes do not have yokes, so they cannot be carried solo.

We certainly worked as a team, and we simply could not have made it if we hadn’t.

We certainly worked as a team, and we simply could not have made it if we hadn’t. While some of the older and stronger Venturers took one more of a load, it’s fair to say every Venturer in Company pitched in.

The greatest thing is we had fun and pushed through a very challenging camp. No one gave up, no one fell out with their friends and we were left with a desire to try even more challenging camps in the future.

One of us used his smartwatch to calculate the distance of the trip. He estimated we travelled just over 100 kilometres. Of course, some of that was due to the back and forth on the portages!

The Value of Youth Leadership

From the Canadian Path to the red carpet—it starts with Scouts. – July 5, 2019
Be Emergency Ready
MyAdventures Blog

Deanna Divito — Youth Spokesperson and Rover Scout – May 6, 2019
A Message from the Board of Governors
MyAdventures Blog

A Message from the Board of Governors

Richard Thomas, Chair of the Board – December 5, 2019
Youth Leadership Training on The Canadian Path
MyAdventures Blog