The 116thNepean Scouting Group was formed by merging two Groups in Voyageur Council in the fall of 2013. The Canadian Path presented the perfect opportunity to review the traditions of both former Groups and to formulate a plan for running events tailored to one larger Group under the Plan-Do-Review process.

The first Group-wide event was an Advancement Ceremony. It was decided early in the process that the Group Committee would coordinate the event and that the Sections would lead their parts in the ceremony. As part of the planning, the traditions of both former Groups were reviewed. For example, one Group celebrated with an outdoor meal and ceremonies, whereas the other Group’s event was held inside, and featured Section slideshows and pot-luck desserts. The logistics of each format were considered from the participants’ perspective and it was decided that a shorter event would be better suited for the Beaver Scouts. By moving the slideshows to separate Section meetings, the Advancement Ceremony’s focus would be on the youth’s progression and on Volunteer recognition. Though our first ceremony was held indoors and included a presentation about the Group’s new identity, the long-term goal was to find an outdoor venue suitable for the event. 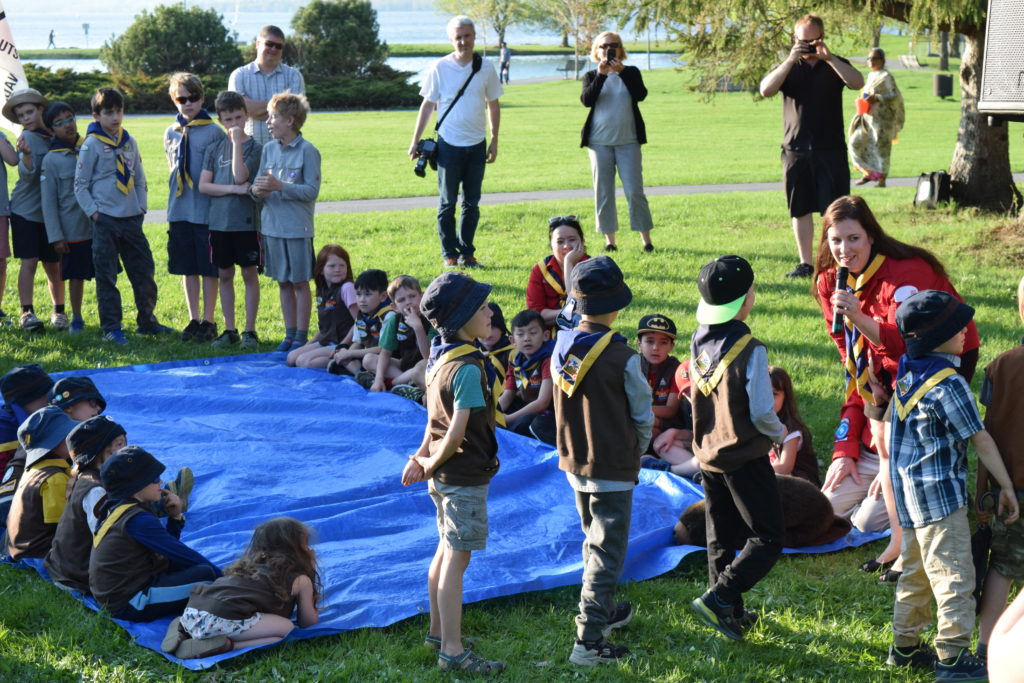 Each Section could tailor its part of the ceremony

In 2017, we held a successful outdoor Advancement event at a riverside park. When planning for the 2018 event, we decided that each Section could tailor its part of the ceremony to make things less scripted, less repetitive and more interesting and meaningful to the participants. We also decided that badges would be awarded at ceremonies at the separate Section meetings and not at the Advancement event. In order to bring back the tradition of including a meal as part of the even, the Scouts and Venturers offered to organize and run a hot dog BBQ to be held before the ceremony. The event plan included sharing responsibilities between the Group Committee and the Section Scouters. Together, we created the following list of tasks:

Gathered on a hillside with a view of the Ottawa River

Fortunately, it was a perfect spring day. As the sun began its descent, the entire 116th Nepean family gathered on blankets and lawn chairs on a hillside with a view of the Ottawa River. The emcees welcomed our local Member of Parliament and the youth stood in choir formation to sing O Canada. Parents and guests were invited to take their seats on the hillside while the volunteer photographer took a group photo. The ceremony opened with the MP speaking about the value of volunteering and the opportunities it enables for youth and adults alike. The MP was joined by our Group Commissioner to present a very special Scouting award to a long-term Scouter. The emcees gave a brief overview of personal progression on The Canadian Path and described how the rest of the ceremony would unfold as a sequence of Section-specific ceremonies and special Volunteer awards—followed by a treat after closing.

The Colony Scouters set up a blue tarp and the Brown and Blue Tail Beavers lined up in Riverbanks formation. The White Tails stood at one end of the river and the Cub Scouts stood their place at the other end. After a Beaver Opening Ceremony, a Colony Scouter briefly described the role of the White Tails and shared some memories of their Northern Lights Quest. Each White Tail Beaver Scout was introduced and was invited to share his or her favourite Scouting adventure. In preparation for the event, the Colonies had completed their spring assessments and had reflected on their entire year. As the Beavers “swam-up” by crossing the tarp toward the Cub Scouts, they carried their memories of Beaver Scouts with them. Akela and the other Pack Scouters shook the new Cubs’ left hands and read the welcome text suggested in the Scouter Manual. The Group Commissioner congratulated the new Cubs and presented awards to the Colony Scouters. The Brown and Blue Tail Beavers were asked to take their place on the hill and the Cub Scouts and new Runners were seated where the Beavers had been. 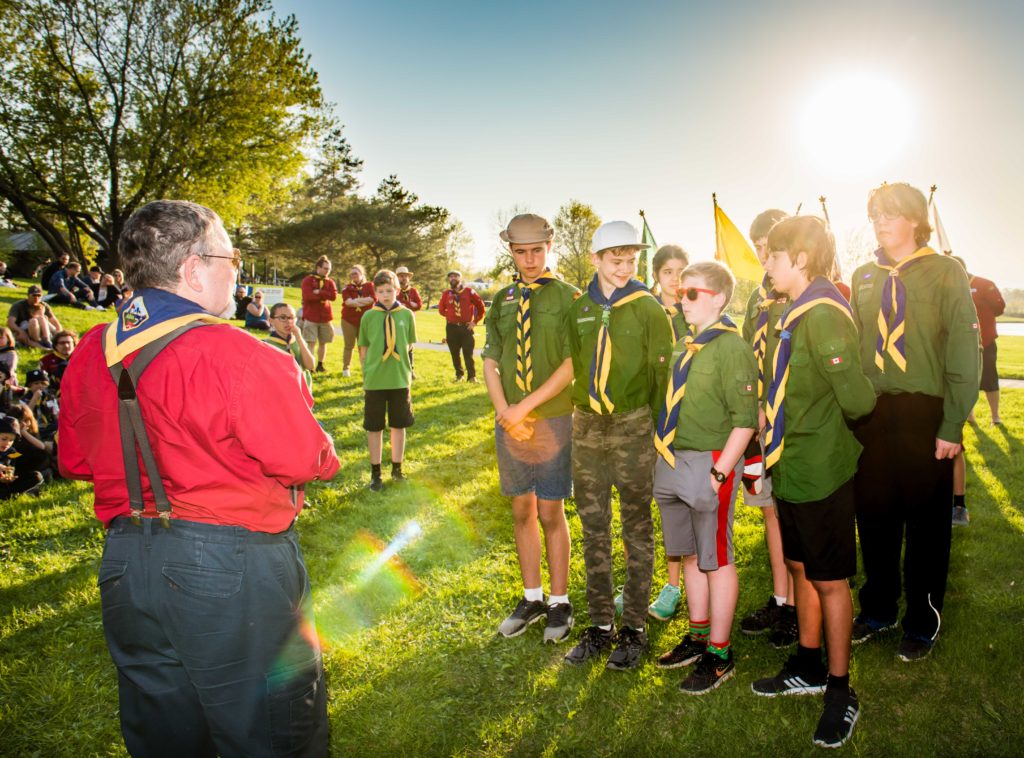 The Cubs were welcomed into the Troop horseshoe

The Scout Troop was invited to form a horseshoe and one of the Pack’s Howlers was invited to lead a Cub Scout Opening Ceremony. Again, the advancing Howler Cub Scouts were introduced individually and then used the microphone to share their most memorable Cub Scout adventure or achievement. The Cubs were in turn welcomed into the Troop horseshoe with a left handshake. The GC congratulated the new Scouts and presented awards to the Pack Scouters. The remaining Cubs took their seats on the hillside and the Venturer Scouts were invited down.

The Troop’s advancement ceremony and Troop Scouter awards followed the same format as the Cubs. Next, the Contact Company Scouter congratulated those moving on to new roles with the Rover Crew. Finally, the emcees revisited the topic of personal progression and shared information about the early registration process. The youth, parents and Scouters were thanked and all were invited to participate in the Group’s summer programs. Before closing, everyone was reminded to make use of the recycling, compost and waste bins to “leave no trace” in the park.

While everyone enjoyed a treat, the emcees informally gathered feedback about the event from youth, parents and Scouters. The feedback was reviewed as part of the 2019 event planning. Thanks to the Plan-Do-Review process, this year’s event promises to continue valued traditions and create some new ones, too. It’s an important occasion for a growing Group on The Canadian Path.

Free Park Admission for 2017 across Canada

Scouts Canada – July 7, 2017
What do Scouts and scientists have in common? More than you would think!
Youth Adventures

What do Scouts and scientists have in common? More than you would think!

A Scouts Guide to Summer Fun

WWI Knights of the Battlefield: The Canadian Aviation Corps