The 7thPrescott Scout Group embarked on a yearlong AHAB (Amateur High Altitude Ballooning) project involving both Cubs and Scouts in a unique and exciting space program called “the poor man’s space program”. In the previous Scouting Year, the Cubs had launched Cricksat – a simple launch-and-forget balloon with a temperature-controlled tone transmitter – and the group had enough leftover material to embark on a second balloon launch adventure this year. 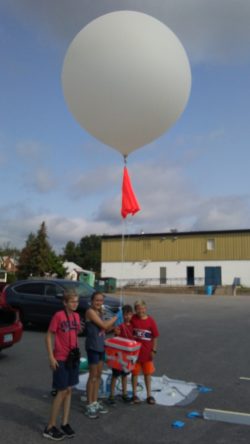 The aim of the 7thPrescott’s STEM project was to track and recover the experiments and data from the balloon flight for analysis purposes. As part of a thorough Plan-Do-Review process, insurance coverage was obtained from Scouts Canada in case something went wrong and detailed careful planning and risk mitigation was used. A detailed proposal was also presented to Scouts Canada.

Nav Canada London Flight Information Centre was contacted a week before the launch to confirm details and send a Notice to Airmen (NOTAM) to alert aircraft of the balloon launch area and flight path.

Each Cub and Scout was given the opportunity to send his or her own experiment into near space. As a run up to the AHAB launch date, retired Scouter Murray made a DIY vacuum chamber (from an old fridge A/C compressor) to show the Cubs and Scouts what happens at high altitude. A marshmallow was used to demonstrate the effects of the vacuum of space and there was a lot of good discussion on why the marshmallow did what it did in a partial vacuum.

I enjoyed seeing the excitement and enthusiasm of people young and older as they worked on this project together, said a parent – Shirley Martin.

For launch and landing prediction, the University of Cambridge “CUSF Landing Predictor program” was used – predict.habhub.org. The ascent and descent rates and burst altitude can be calculated from first principles or you can use the “Totex Balloon Burst Estimator – by Steve Randall” which is available on the web. Below is the predicted flight path produced by CUSF and used to produce the NOTAM details. 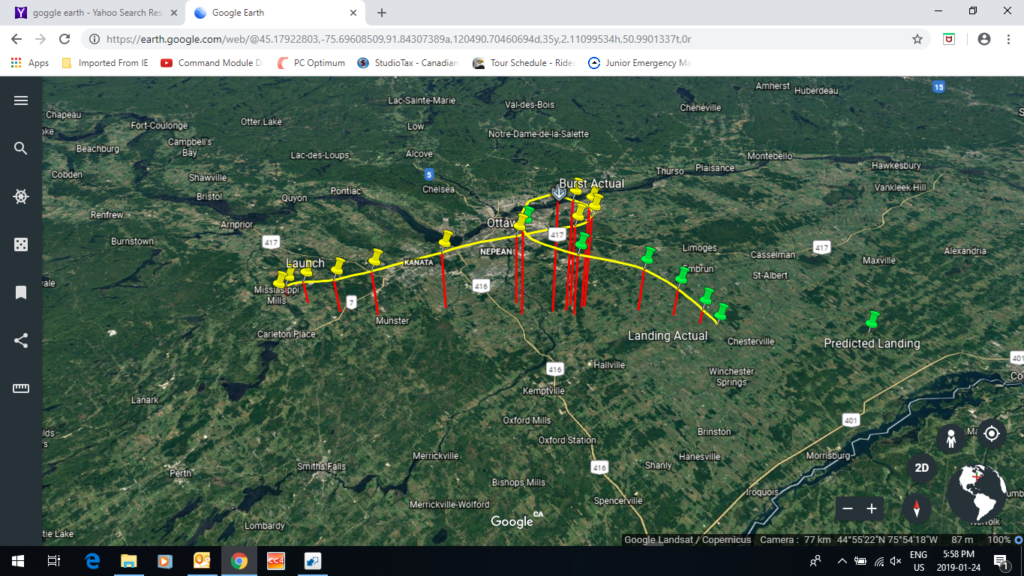 The launch location chosen was Almonte District High School parking lot. The lifting gas used was helium, which is much safer than hydrogen. For this flight, the balloon was inflated to 190 cm in diameter which used approximately 39 cubic metres of helium. Below is Scout Harman with inflation in progress (the balloon got much bigger).

It was a lot of fun watching the troop coming up with ideas for experiments. It was interesting watching them work as a team to launch the balloon, said Troop Scouter Wayne Reid. 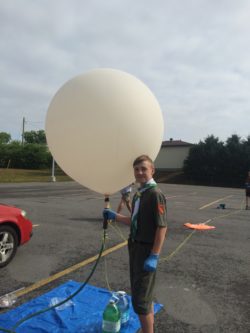 The platform used by the 7thPrescott Group was AHAB – Amateur High Altitude Ballooning. AHAB is the study and use of high altitude weather balloons to explore near space which is the region of atmosphere between 18,300 metres and the accepted boundary of space at 100,000 metres altitude. Air pressure in near space reaches 99% of a vacuum or better and temperatures drop to a low of -50° C or colder.

For this year’s launch, an Arduino Uno microcomputer was used as the flight computer with data logging as well as a better web based and redundant location tracking systems (SPOT and cellphone tracking app -followmee). The balloon used was a 600 gram TA-600 with an estimated burst altitude of 24,400 metres. (As a comparison, the group tracked the Cricksat the year prior to approximately 6,400 metres.) 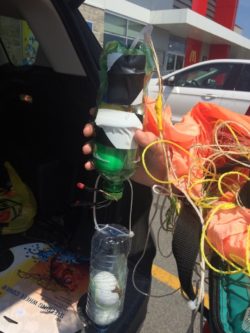 At 10:30 a.m. on 14 July 2018, the balloon was launched. The GPS tracker worked great and the flight was tracked on the web for all to see. Below is the Google Earth overlay showing launch, tracks (RED is data logger GPS, YELLOW is the cellphone followmee app and BLUE is the SPOT satellite track). Note that the actual landing was short by about 23 km from the prediction.

The flight was a bit shorter than expected, probably due to a quicker ascent (more helium in the balloon) and a quicker descent (the balloon free fell, which the prediction simulation may not have taken into account).

Below are some pictures from the on-board camera. 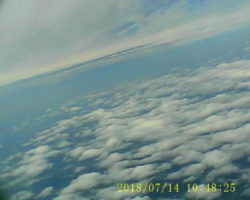 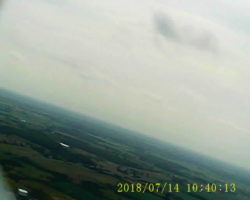 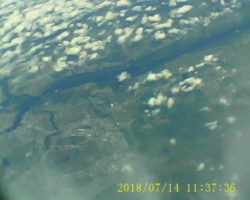 This picture, we believe, shows the darkness (blackness) at the edge of near space. 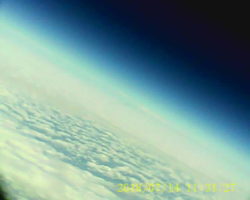 Landing in the corn field. One of the last pictures taken before the battery went dead. 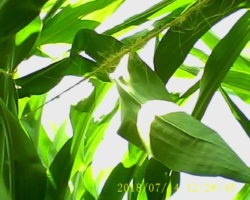 The recovery of the payload was interesting! We knew the landing location (a cornfield), but the corn was over our heads, so we could not see the balloon. Scouter Wayne and his son Harman (a Scout) went out to the location on the Monday after launch and with the help of a handheld GPS walked right to the landing location in the middle of the cornfield. Below is the recovered payload and balloon bits. 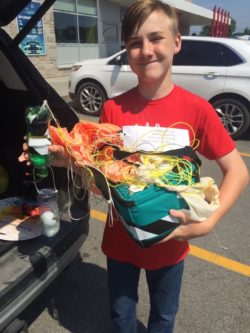 All in all, it was a very successful STEM project. This STEM activity was about a year in the making, starting with the proposal, Arduino programming, cold soak testing and camera testing.  The youth and their Scouters had some great conversations about what they had learned from their STEM experiment. When asked what they would do anything another way next time, Harmon answered that he would pack the egg differently in the payload: next time, it will be bubble-wrapped .

Volunteer Voice: How We Use ScoutsTracker

It's a Scouting Life for Me!