From snowshoeing, to sledding, and sleeping in tents, winter can offer a variety of activities to do with your patrol, pack or colony. If you are prepared for the cold, and ready to have fun, there is a lot of games, sports and activities to try out. 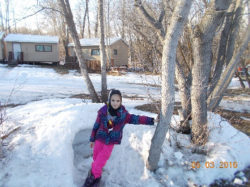 When I look back over my nine years of Scouting, camps are my most prominent memories; from the one time we went skating on the frozen lake when I was a beaver, to when we tried building Quinzees in Cubs, and lately when I decided to sleep in a tent at last year’s winter camp. That last one was not the best idea.

One of my favorite activities I remember doing, other then making fires, was when we played an improvised game of curling on a frozen pond. There was this single big circle dived into four smaller circles on the ice; a big blue one, a medium transparent one, a smaller red one, and small transparent one in the middle of the red one, as you can see in the picture beside. The blue one was worth five points, first transparent one ten points, red one fifteen points, and the smaller transparent one twenty. We used ten milk jugs in red and blue, as stones. Each player had to slide the jugs to the middle, hoping to get the highest score. This is just an idea of something you can do on a frozen body of water, but remember you always have to be safe when doing any activities on ice; always wear a helmet and verify the thickness of the ice when you skate on it.

Mission: Impossible, or Capture the Flag are always a hit in my camps. Mission Impossible is a game where you have to touch an object or a structure, which will be guarded by a few players, without being seen. Capture the Flag is a variant of the game where you have to take an object –usually hidden somewhere the other team’s side- and bring it back to your side. In the winter, it is even more fun because you can build structures to hide your object in, and every player is slower because of the winter gear. When my troop last played it, we decided to organize the game for the cubs who were having their winter camp with us. It was extremely fun, even if we didn’t do the best job at organizing.

One of the most classic winter activities are snowball fights. I remember one time, when I was in Cubs, we had a gigantic snowball fight where we even built forts. We had two forts, on opposite sides of a field, and each side had two lairs as part of the crew. The goal was to either take every Cub as a prisoner of the other side by hitting them with snowballs (make sure there is no ice in them) or by stealing their flag which is in the middle of the snow fort. If a cub was hit, they would go to a place in the opposite team’s fort and had to wait for a teammate to escort them back to their fort. The game lasted for about an hour and a half, and I remember all of us having a lot of fun.

Scouting, and camping can be all year round, and is fun no matter the season. In the winter it is especially important to be prepared by having  the right gear and knowledge; after all, “There’s no such thing as bad weather only inappropriate clothing and gear.” It is never fun to have a winter camp where you are wet all weekend and where you are cold. As long as you are prepared, anything can be fun!

Scouts Canada – August 14, 2019
So what is Scout Guide Week all about?
MyAdventures Blog

So what is Scout Guide Week all about?