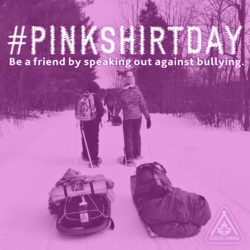 Every year, around on February 27th, Pink Shirt Day strives to raise awareness about bullying, give resources, and overall promote kindness in the world. Pink shirt Day began in 2007, when David Shepherd, and Travis Price handed out pink shirts in order to stand up for a boy who was being bullied for wearing a pink shirt. Since then, it is celebrated in multiple countries around the globe.

According to the government of Canada, one of out three Canadian teens have reported to have been bullied. Bullying is a serious issue, with serious consequences; it can lead to anxiety, depression, low self-esteem, and even suicide.

Bullying is when someone hurts, belittle or scares someone else; it’s usually not an isolated event. There is a power imbalance; the bully has more power over the victim. There are four main types of bullying; physical (hitting, spitting, pushing, etc.), verbal (name calling, teasing, spreading rumours, etc.), social (ignoring others, excluding, humiliating, etc.) and cyberbullying (using technology to intimidate, put-down, make fun, etc.) None of these forms of bullying are acceptable in Scouting, it goes against our values as Scouts. Scouting provides a bully-free zone thanks to our Scouters and volunteers.

Andrew Q., a Scout and Youth Spokesperson, says that Pink Shirt Day is about coming together as a country to make positive changes. He states that it’s about recognizing that bullying is a problem and providing help and support to those who need it. It’s a time to spread awareness, so that more voices nationwide can stand up to bullying.

Regional lead and Scout, Ana-Alexandra M., has a similar opinion. She says:

Pink Shirt Day is a day during which we all come together. We all stand against bullies, against unfairness and against inequality in general.

“It’s a day to celebrate our differences. It’s a day where you say it’s okay to be myself and help others be themselves. A day to say “NO” to discriminating against others.”

Quinn M., a Scout from Ottawa, thinks that Pink Shirt Day is a great initiative to raise awareness about bullying. He says, “By wearing a pink shirt to show support and talking about bullying, we can help to recognize the signs of bullying and learn how to help stop it from happening in the first place.”

By wearing a pink shirt to show support and talking about bullying, we can help to recognize the signs of bullying and learn how to help stop it from happening in the first place.

For Toronto- based Scout, Vivan B., Pink Shirt Day is a day where different people are treated the same, no matter the differences. “People get bullied all the time,” he says, “But it has to stop and we have to work together. We have to stand for others just like the two grade 12 students; David Shepherd and Travis Price and a few of his friends did in Nova Scotia when they saw a grade 9 student getting bullied because he was wearing a pink shirt on the first day of school. They decided to also wear a pink shirt in support of this student”

The youth spokesperson also answered another important question: what can we do as Scouts to stop bullying?

According to Andrew, Scouts must be a good example. “Treat others the way you want to be treated,” he says. “If everyone was kind, there wouldn’t be a problem. We can spread awareness by making posters. By making posters we can make more people aware of the issue. Talking about anti-bullying at scouts and having a group discussion is another way. It’s a way to open the conversation to anyone, allowing problems to be solved. However, speaking up can be a difficult thing to do. As a bystander and as a scout, you may have to lend a helping hand. If you witness someone struggling, reach out to the incredible sources that are available both at scouts and beyond (see resources at the end of the article).”

Quinn shares a similar point of view. “As scouts, we can be a good role model and help prevent bullying when we see it.  Through our scouting activities, we learn to always be kind and helpful, to treat people the way we want to be treated and to accept people for who they are.”

As scouts, we can be a good role model and help prevent bullying when we see it.  Through our scouting activities, we learn to always be kind and helpful, to treat people the way we want to be treated and to accept people for who they are.

Ana-Alexandra suggests a more direct approach. She believes that it’s our duty as Scouts to stand up for others according to the Scout promise.

I promise […] to help others at all time and to follow the spirit of the Scout law,” she states. Does that sound familiar to you? That’s because it is part of the Scout promise. It’s our duty, as Scouts, to do something about bullying.

“We don’t have to solve the whole crisis; bullying is a complex problem with many sources and many victims. It’s a cycle. What we can do is make someone’s day better, and take a stand when we witness bullying. Taking a stand against bullying doesn’t have to be more complicated; if you see someone getting bullied, help, and tell a trusted adult, whether it’s your parent, a Scouter or a teacher. Remember that bullying is not tolerated in Scouting at all!

Vivan sums the whole idea up very well. “Bullying is very bad for your mental health. Bullying can make you feel down and lose your overall motivation. But that is not the way to do it! Lots People get bullied all the time, even amongst friends sometimes. But bullying and belittling people should never be tolerated at home, at school, at Scouts, at work or anywhere! If you see someone getting bullied don’t walk away, tell the bully in a calm way that bullying is not right, if needed, get help from an adult or a Scouter!

Remember, bullying is not to be tolerated in Scouting. It goes against everything we stand for. If you, or someone you know is getting bullied, speak to a trusted adult. You can use resources such as Kids Help Phone to seek help if needed, and you can check out this Safe Scouting resource on how to prevent bullying. You can also read last year’s article for more information and visit other websites that aim to prevent and eliminate bullying such as PREVNet.

Check out this video created by four of Scouts Canada’s Youth Spokespeople to see how #ScoutsStandTogether against bullying.

#ScoutsRemember and Recognize the Value of Supporting our Veterans

By Youth Spokesperson & Venturer, Kaelem M. – November 8, 2019
Message from the Board of Governors
MyAdventures Blog

Scouts Canada – December 12, 2017
Get on the Path with the Canadian Path Starter Kits!
MyAdventures Blog

Get on the Path with the Canadian Path Starter Kits!

A Family Empowered by Scouting