I’m just happy to help the people who have been working hard to keep all of us safe.

When Maple Ridge Scout Quinn Callander’s mom, Heather Roney, showed him a Facebook post about the strain frontline healthcare workers are experiencing from wearing face masks for long stretches of time during the novel coronavirus pandemic, he immediately went online to find a way to help. The family already owned a 3-D printer, and Quinn was confident there was something he could print that would offer relief.

It wasn’t long before he found printing instructions for ear guards, a plastic strap that a face mask can be hooked to at the back of the head, so that the face mask doesn’t put strain on the wearer’s ears.

To date, Quinn has personally printed and given away roughly 2,000 ear guards, and his good deed has inspired others to produce and provide thousands more.

Quinn first printed several prototypes. The next day, a family friend who works as a nurse picked them up to give them a try. Sure enough, the ear guards helped. She told Quinn which design worked best, and he went to work, printing eight ear guards at a time for days.

As a great example of Plan-Do-Review in action, Quinn found ways to reduce the time it took to print each sheet of ear guards. He modified the printing instructions, and engaged the online 3-D printing community for more suggestions.

Heather says they’re “getting really good advice from a lot of the people that have been responding to the post and saying, ‘Hey, I have the same printer—this is what I did.’ And then Quinn and his dad would go and try that and see if they could improve things. It’s a nice thing. The 3-D printing world is very generous with their knowledge—happy to share it.”

Eventually, Quinn cut the print time for eight ear guards down from five hours to just an hour and forty-five minutes.

(A)ny sort of stress or pain that they may have, I can at least help with relieving it.

“Still, I answer messages daily,” she says. “It’s like a full-time job for me some days.”

Media outlets around the world rushed to share Quinn’s story. His ear guard initiative has been shared by WOSM, The Globe and Mail, The Washington Post, Forbes, News-O-Matic,  Inside Edition and Dr. Phil—to name just a few.

“Quinn got his first fan mail,” Heather says. “The [News-O-Matic] producer that was doing the story sent me a bunch of drawings that kids had made of the ear guards and Quinn. It was so cute. It was adorable.”

The family has provided ear guards to more communities and organizations than Heather can name off the top of her head. They first delivered ear guards to the Royal Columbian Hospital in New Westminster, and have since sent hundreds more to hospitals across British Columbia, Canada and the United States. They have also given ear guards to home support workers, prison guards and pharmacy workers, as well as people who otherwise wouldn’t be able to wear face masks because of physical limitations or religious head coverings. 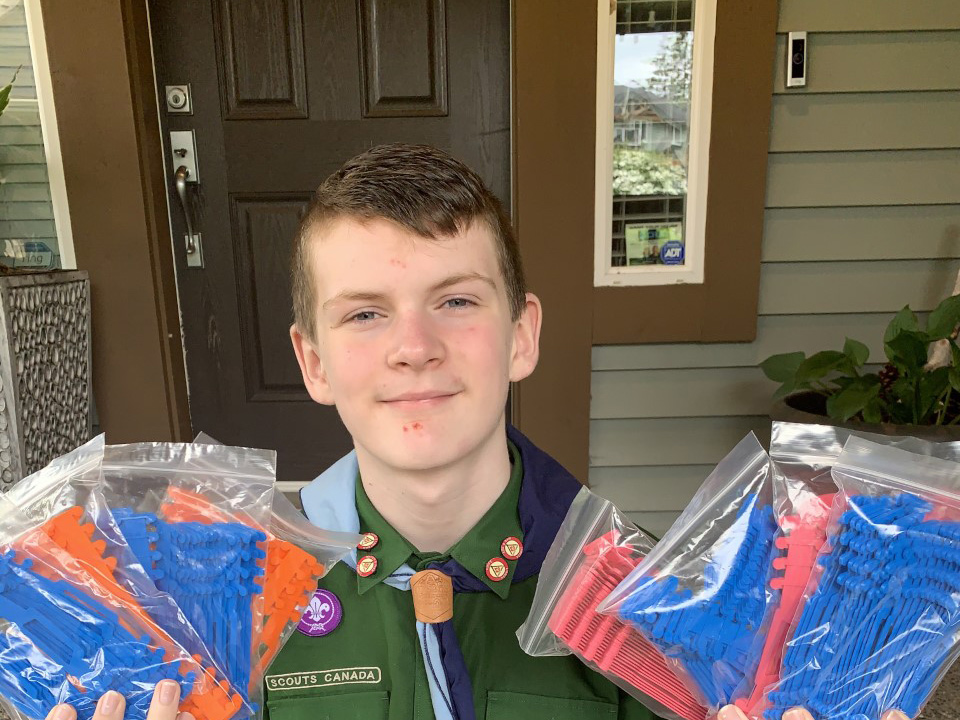 “I’m just happy to help the people who have been working hard to keep all of us safe,” Quinn says. “My favourite part is being able to know that I am easing the pain of the people who are trying to keep all of us safe, who are risking their lives to help us. And any sort of stress or pain that they may have, I can at least help with relieving it.”

Quinn’s work has spurred people around the world to action. He proudly reports that Thingiverse.com, the website where he first found the printing instructions for ear guards, has since seen over 150,000 downloads of the plans.

Five manufacturers have come forward to produce more ear guards, including one in Canada, three in the United States and one in the Philippines. The Canadian manufacturer provided Quinn with 25,000 ear guards.

Until recently, Quinn’s parents (who are both Scouters with 1st Laityview) were providing ear guards completely at their own expense, paying for both the printing of the ear guards and shipping. They have recently partnered with the Scout Shop for support with distribution.

To discover ways that you can get involved in helping others around you, while maintaining physical distance, visit Scouts.ca/GetInvolved.