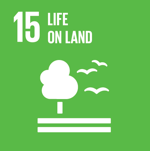 Growing up in Hammonds Plains, Nova Scotia, Mac Whitehead spent much of his childhood outdoors, which he says is thanks to Scouts Canada programs. His most significant interactions with the outdoors came from his time in Scouting. These experiences taught him much of what he knows today.

“Scouting instilled the passion and fire to want to protect the environment,” Mac says.

This is what ultimately led him to apply to the Canadian Conservation Corps (CCC), a nine-month experience for youth between the ages of 18 and 30 who are passionate about the environment, conservation and wildlife. The program is facilitated by the Canadian Wildlife Foundation (CWF). It is a three-part program that offers youth hands-on learning and experience, while having a real impact on conservation.

The adventure begins with an exciting wilderness journey, followed by a field placement spanning four to five months. Finally, participants develop their own idea into a meaningful service project in their home community and pass their knowledge on to others for their final three to four months. For Mac, this meant working on conservation efforts close to his home, in and around the Bay of Fundy.

Mac was already a seasoned outdoor enthusiast from his years Scouting with 1st Hammonds Plains. He started in Beavers and kept Scouting all the way through Venturers. He joined the CCC with hopes of gaining more hands-on experiences and furthering his knowledge about the vast opportunities for conservation across Canada. Conservation issues are close to his heart, and the CCC gave him the opportunity to work on areas he is most passionate about, including deforestation and ocean pollution.

I don’t think I would be where I am today without the lessons I learned from Scouting. Scouting taught me how to have a strong and effective work ethic, how to work with others, how to be a smart and effective leader, how to have respect for the earth and understand just how important it is to us.

Mac had many standout experiences when he thinks back to his time with the CCC, but his most notable memory involves his field placement as a turtle conservationist with the CWF. Their main focus was on Blanding’s turtles, an endangered species found in central and eastern parts of Canada. Mac and his group got to do their own wetland surveys in search of these special turtles.

He remembers the first time he found a Blanding’s turtle and, to his surprise, his boss told him that it was the first recording of a Blanding’s turtle in that area. This meant that a 2-km radius from where the turtle was spotted would be classified as protected land so that they can be kept safe. This was the first time that Mac felt like he had personally made an impact in conservation. It was a really good day for him and one of his best memories from his time in the program.

With his new knowledge and experience, Mac hopes to continue to demonstrate the importance of the environment to the younger generation. He spent summers working at Camp Lone Cloud as a counselor and then Mainland Director, where he found this passion for working with children and youth. This also gave him the experience to work with the S.M.I.L.E. (Sensory Motor Instructional Leadership Experience) program, where he supported youth with exceptionalities and kept them active and engaged in the community and the outdoors every week.

When asked what advice he would give to a Scouter today, especially in terms of the need to protect our environment, Mac suggests focusing on putting your own passions into the program. Scouters all have a passion for the great outdoors, and it’s critical to take the time to instill this passion in youth. Mac emphasizes that this made all of the difference in his own pathway in life and led him to where he is today.

Our planet health is in a less than ideal situation and without the work of people, especially youth, we may not have an Earth that can sustain us for much longer.

More than ever, we need to come together to take steps in prioritizing our environment and our planet as whole. Mac strongly encourages everyone to get involved in conservation efforts. Education and understanding the issues is the first step; through learning and enthusiasm, people will come the understanding how we can move forward to preserve Life on Land.

Mac is continuing on his path in the conservation field. He has a place in his heart for his beautiful home province of Nova Scotia, and hopes have a local career that will allow him to continue doing his part in creating a more sustainable future.

Looking for something a bit different? Take a look at an ocean and water-themed focus; Ocean Bridge from Ocean Wise is a program similar to the Canadian Conservation Corps, for ages 18-30.

This article is part of a series to explore the 17 Sustainable Development Goals under Scouts’ sustainability programming. Keep your eye out for more interesting content to come. To find out more about Scouts for Sustainability, visit Scouts.ca/sdgs.

This Giving Tuesday, give ‘Thanks’ to those who have made Scouting possible for you
MyAdventures Blog

Scouts Canada – November 11, 2016
Getting Involved in Scouting and What It Means to Be on the Canadian Path
MyAdventures Blog