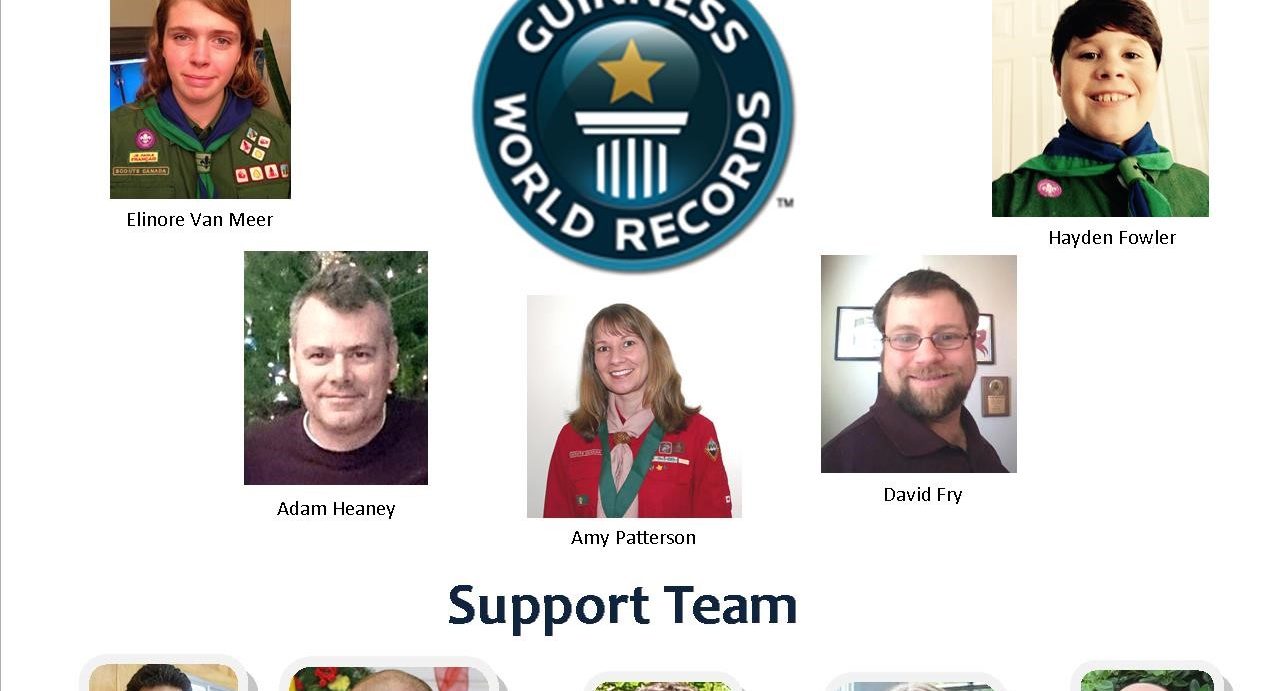 On July 19, 2014, as Flat Rock Scout Camp in Thomasburg ON, planned its 29th annual event, they wanted to create something exciting for the kids. The idea came to contact Guinness World Records and submit an official attempt request to beat the record for “The fastest time to erect a 4 man tent by a team of 10”. Members of Scouting and the community rallied to find the support that would be needed to fulfill requirements set out by Guinness. Photographers, videographers, expert witnesses, and time keepers were secured and essential gear was acquired.
On the Saturday morning of camp, the Guinness attempt team and support crew met up for the first time to begin a day of practice. The Eureka Scenic Pass 4 tent was carefully unboxed, roles were assigned to each member of the team and everyone began going through the set up in slow motion. Together they adjusted, tweaked and hustled through hours of rehearsal in preparation for the big moment.

Patrick Hurley, Belleville lawyer, arrived to act as the official witness that would verify that the rules of Guinness were followed. Jesse Platt, of the Quinte Conservation Authority, would be a second official witness. His job would be to confirm that the tent was set up to factory specifications. Jonathan Bell from the Flat Rock staff would be one of two photographers. Jon was joined by Mary McTaggart, a Campbellford Scouter and experienced photographer. Official time keepers, Everett Dumas and Linda Braun took their positions with stop watches calibrated. Experienced video operators, James Heaney and Kevin Dunn were filming and had been with the team through the day, capturing the practice attempts and giving feedback. Coach, John Parks, gave a pep talk to the tent team with some last words of advice. The crowd was instructed to be quiet and still for the next 2 minutes. The time had come. This was it.

Everyone was focused, and ready to start on the whistle signal. Like a shot, the tent was unrolled and 10 people descended upon every part of it. The fly was spread, corners were pegged, zippers undone, poles assembled; meanwhile the support crew were doing their part. Cameras were snapping, video was rolling, time was ticking and witnesses were studying. In a flashing moment the orchestrated team had jumped head first into their completed tent, zipped the entrances and shouted a collective, “TIME”.

The camp was silent as the team stayed huddled in the tent. Outside, the support crew each carried out their own responsibilities and whispered as they conferred with each other to ensure that all mandatory requirements had been met. FINALLY, the process was done and the team counted off as they filed out of the tent. They were together holding hands as everyone waited with baited breath for the results.

THEY DID IT! The announcement was made…1 minute and 58 seconds! The previous record had been beat by 9 seconds. The camp erupted in cheers, pictures were taken and hugs were exchanged. What an indescribable moment!

In January 2015, Flat Rock Scout Camp received word from England that the evidence package was accepted, team had officially won the World Record. The leaders and youth who were part of this extraordinary event should be very proud for making this happen for them, the camp and for the spirit of Scouting.

In July 2015 Flat Rock celebrated their 30th year as a camp. Pictures of camp can be found on the camp website, www.flatrockrapids.com . Flat Rock and Scouting are committed to delivering a quality program and a lot of fun. Join the adventure. 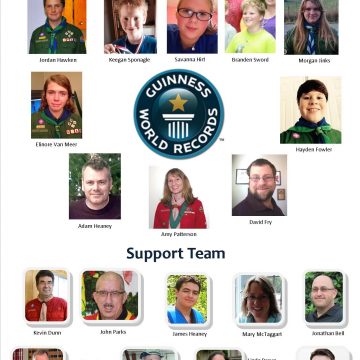