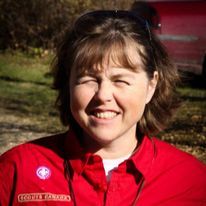 Except for the recent very brief (six month) lapse, Lynn Eremondi has been a member of Scouts Canada since September 1994, when she became the Special Events Coordinator for the 40th Eastview Group Committee in Saskatoon.  In 1996, she became Bubbles, which she enjoyed until 2006, both with the 3rd Coquitlam, BC Beaver Colony for a year and with 22nd Bethel in Saskatoon.  She was named Raksha by the Cubs at 22nd Bethel and was a Cub Scouter from 2004 to 2008 and again from 2011 to 2017.  Lynn has been a Council Trainer since 2005 for Beaver, Cub and Venturer Scouters and Advisors, as well as Group Commissioners.  She was the Deputy Council Commissioner – Training from 2008 to 2011 and was a contributor to both the Group Commissioner training and the first online Colony Training modules. She was the Area Commissioner in Prairie Heartland from 2015 to 2018.  Lynn accepted the role of Property Supporter in Saskatchewan in the spring of 2021, working as a liaison between the National Property Operations Team and finding answers to questions for the property committees here in SK.