Welcome to Scout Scene! Scouts Canada’s National quarterly newsletter. In each edition, we’ll share updates on fundraising, national initiatives and highlight some of the great partnerships that help support Scouting youth across this great country.

After a long dreary winter, the Great 8 Challenge has reignited the magic and excitement of Scouting across Canada. From learning first aid and wayfinding to cooking with foraged ingredients, the eager, smiling faces of participants in weekly themed adventures are a clear win for Scouts Canada and the parents and leaders supporting the youth. Little wonder the program has turned out to be its most successful ever.

“Our Beavers and Cubs have been so excited about the challenges because we’re doing something different and they know they’re in a challenge with the rest of Canada,” says Paula McGrath of 1st Fogo Harbour Lions group in Newfoundland. Winner of Week 5’s “Disaster Master” challenge, the group is seeing enthusiastic participation in the weekly activities. “And the parents are excited too because they’re learning new things.”

In addition to leveraging skills and survival scenarios detailed in Survivorman Les Stroud’s book, Wild Outside, the program provides instructional webcasts for Scouters prior to each new challenge. The focus on Scouter development is definitely finding favour with leaders, providing them the expertise they need and giving them the competencies that really help their confidence in providing a quality program experience.

And if the happy faces and proud accomplishments of youth aren’t enough, the numbers underline the incredible uptake of the program. To date, up to 60 percent of sections are participating and youth have enjoyed 50,000 unique adventures. Social media impressions are reaching 800,000 since the beginning of the program, while YouTube hits have exceeded 34,000. The program has also been picked up by Girl Guides as well as other national scouting organizations.

Created in just four weeks, the Great 8 Challenge leveraged an amazing opportunity to reinvigorate participation in Scouting in ways that were scalable and adaptable to pandemic-related restrictions. It drew on some of the most successful components of programs like Program in a Box and Scout Cons. And given its success, the Great 8 Challenge will definitely inform program design moving forward.

Diversity & Inclusion: The First Steps of the Journey

As we continue to mourn the loss of 215 children at the former Kamloops residential school and each individual Canadian, organization and institution reflects upon their role with regards to residential schools, Scouts Canada has taken its first steps on a long journey towards diversity and inclusion with a focus on reconciliation with Indigenous Peoples.

We recognize that as an organization we need to provide an authentic and safe sense of belonging for our members and the communities we serve. We also recognize the need to take a close look at ourselves and our past; to gain a critical understanding of our history, both intended and unintended. We plan to better understand the role Scouting has played in contributing to the intergenerational harm that resulted from the residential school system and the broader implications of colonization.

In the previous edition of Scout Scene, we announced our formal commitment to Diversity Equity and Inclusion and the recent news related to residential schools in Canada underscores our genuine commitment to this journey. We are only at the very beginning stages but have already taken steps towards this pledge, including the hiring of a Director of Diversity and Inclusion to work alongside our CEO, as well as creating a working group within the Board dedicated to Diversity, Equity and Inclusion. This working group has already undertaken their own learning process by engaging with a historical panel as well as connecting with Scouts New Zealand and other organizations about their reconciliation journeys.  Most recently, the Board of Governors met to discuss the path to reconciliation and announced a clear commitment to action. The full statement including our Guiding Principles and Commitments can be read here. As part of the up-coming quarterly board meeting, the Board also dedicated additional time to focus on this important topic and the path forward. In addition, we are providing age-appropriate resources to our members and volunteers to learn about residential schools and to begin the process of awareness and understanding.

This is only the beginning of a complex journey that starts with listening and building self-awareness. We are also committed to receiving feedback and to fostering an open dialogue with our communities across Canada, and plan to host virtual listening circles each month to gain a further understanding about how we need to transform and continue to improve in meaningful ways. 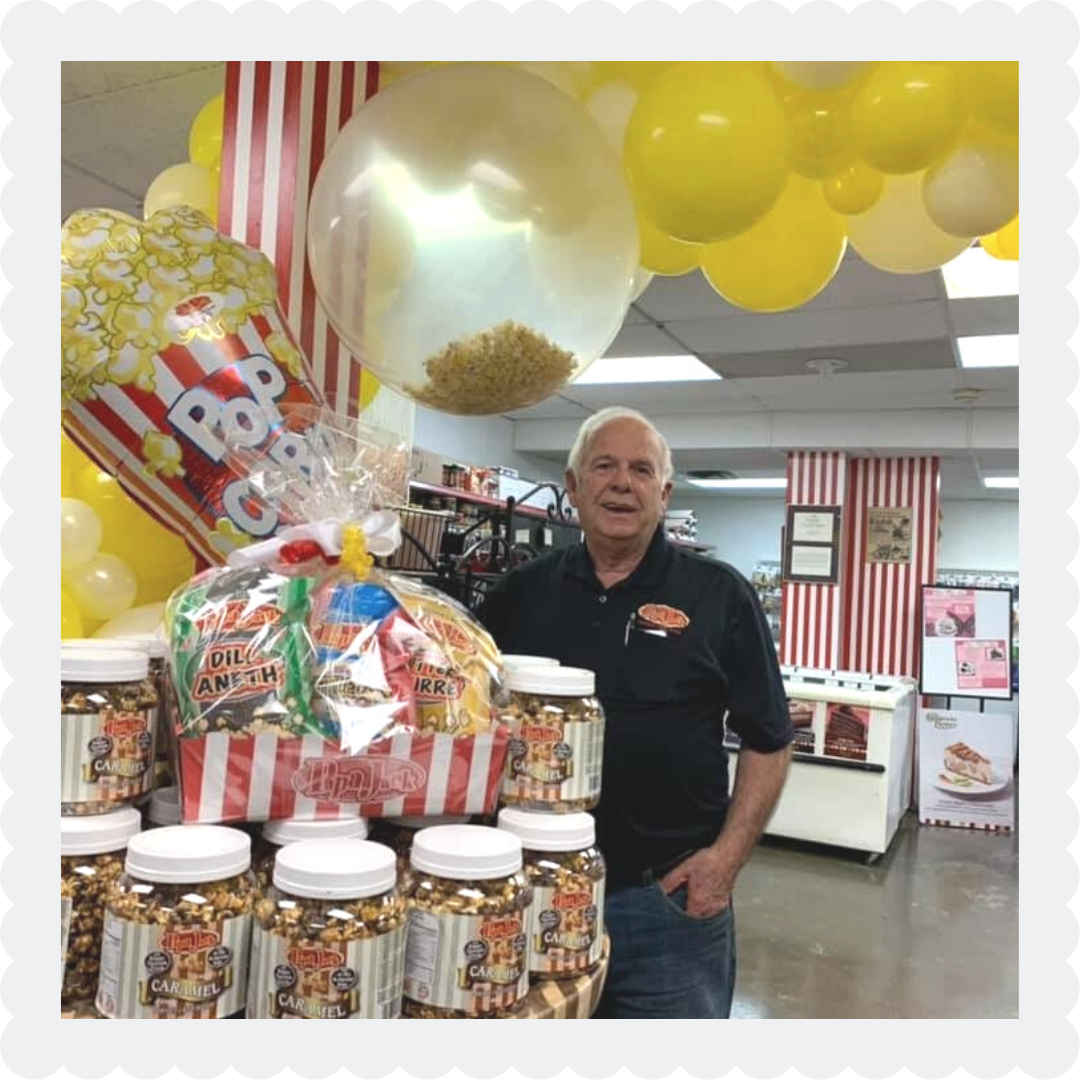 Jack Lalonde is no stranger to Scouts. Like most parents, when he signed up his kids for Scouts back when they were little, he was asked if he would like to volunteer. After his first camping trip with Scouts, he was hooked. He did have one request though, that for the next camping trip, he be in charge of the cooking. Jack spent close to 17 years as a volunteer Scouter with the 141st Carson Grove Scouts and enjoyed every minute of it.

With over 30+ years in the food business, Jack knows a thing or two about food and what tastes good. Fifteen years ago, Jack started his popcorn business, Papa Jack Popcorn, not in his basement (as he likes to point out) but in the same storefront he still occupies today, albeit a much larger portion of the building than the original store. His three kids, now married with kids of their own, have joined Jack as part of Papa Jack Popcorn. So, when Scouts Canada approached him about becoming the new supplier for Scout Popcorn, it was a natural fit.

“The experience we’ve had so far with Scouts has been very good.  The orders are coming in and the product is going out; the product and packaging look great!  We’re happy to be shipping across-country,” say Jack.

Produced in Ottawa, Ontario, Papa Jack’s Popcorn is truly Canadian made. Everything from the corn which is grown in Canada, to the equipment used to make the popcorn, even the bags and boxes that are used for packaging and shipping are all Canadian made. “We believe in making sure to get as much as we can that is Canadian made,” says Jack.

Scout Popcorn has always been a key fall fundraiser for Scouts Canada. With a new Canadian supplier on board, the decision was made to also try Scout Popcorn in the Spring. It’s proved to be a winning combination. Groups receive 45% of the retail price, and the online order process allows customers to direct their support to their local Scouting group, ensuring their dollars stay close to home. In addition, net profits also go to the No One Left Behind (NOLB) program, which provides children and youth from low-income families with the opportunity to participate in Scouting.

Scouting was a part of Jack Lalonde’s life that he truly enjoyed and he is proud to be the new Canadian supplier for Scout Canada’s Scout Popcorn fundraiser.

Hoping to Camp This Summer?

Last summer, with the uncertainty surrounding the pandemic still unfolding, Scouts Canada, made the difficult decision to cancel all youth summer camps throughout the country and move to a virtual model. As Scouts Canada properties sat idle last summer, many volunteers and Scouters suggested that camping within family bubbles at Scout Canada properties might be a good option if the pandemic continued into the summer of 2021.

Fast-forward to January 2021 and the prospects of youth summer camps again appeared to be dwindling at the height of the second wave in Canada. The Property Operations team at Scouts Canada began seriously exploring the option of having family bubbles camp at select properties as a pilot. This option would, if viable, potentially generate some revenue for the camps, after more than a year of no camping and still provide an opportunity for great adventures. The team had been mapping out a variety of scenarios since the fall and got to work finalizing a plan that had to consider everything from creating family tenting sites and suitable cabins within each property, to managing individual bookings, identifying appropriate programming, hiring staffing and of course all the necessary pandemic safety protocols. A plan was created which identified three Scouts Canada properties that would be suitable to pilot this project. All three of these properties had traditionally run fully staffed day camps in the summer and had knowledge and skills that could be drawn upon during this pilot.

After countless hours, dozens of internal meetings and numerous meetings with health authorities, Family Adventure Camp 2021 was formally launched on May 6, 2021. Three camps were selected for the pilot project which would host family bubbles for overnight camping in July and August: Camp Samac (Whitchurch-Stoufville, ON), Camp Opemikon (Maberly, ON) and Woodland Trails Camp (Oshawa, ON).

Billed as an all-access summer camp, families will receive a genuine Scouts Canada camping and programming experience with access to all on-site amenities, including canoeing, kayaking, trails and a host of other amenities. In addition, instructor-led programming will give families a true taste of Scouting. Programs such as archery, orienteering, astronomy, guided hikes, paddling tours and low-ropes courses are just some of the amazing experiences families can expect this summer. For those families who may not want to camp overnight all three camps are also offering day passes, which includes all amenities and instructor-led programming.

“We’re very excited to be able to pilot this great new initiative and allow our Scouting families the opportunity to create their own adventures, get outside, engage in quality time together and enjoy our amazing properties this summer,” says Kalie McKenna, Director of Property Operations.

Currently, bookings are reserved for Scouting families; those with a registered child in Scouts, active Scout Volunteers and staff. But with bookings already filling up quickly, it looks like the Family Adventure Camp pilot project will be a summer 2021 success story!

Scout Seeds by the Numbers

This was the second year for the Scouts Seeds fundraiser and it was a huge success! Right about now, gardens across the country are sprouting everything from carrots and beans to cilantro and dill, all in support of great Scouting adventures.

No One Left Behind

We’re almost half way there!

Through generous donations and fundraising initiatives, Scouts Canada has so far raised over $400K towards our goal of reaching $1 million dollars for the No One Left Behind (NOLB) program. Ensuring all youth have the opportunity to participate in Scouts by reducing the financial barrier for families is key.  We’re well on our way to supporting over 4300+ youth this year, but we still need your help!  Consider donating to the NOLB program today!

No One Left Behind

Since December 2020 Scouts Canada has moved to using only recycled materials for all its shipping packaging. All shipping packaging is also fully recyclable too! Scouts have always been known for supporting environmental causes, and this is another small step towards sustainability and a healthier planet.

Creating a legacy gift as part of will planning is a generous and thoughtful way to provide a lasting impact.  Your legacy gift could help Scouts Canada create more exciting opportunities and new programs to help youth discover their true potential.

When you partner with Scouts Canada you demonstrate to Canadians, your community and your customers a commitment to youth, families and the future of Canada.  Impact over 75K households across Canada, directly connect with over 56K Canadian youth with a proven media reach of over 30 million impressions annually.