Volunteers are the heart of Scouting and over the last 12 months our Scouters have stepped up to the plate again and again.  Last fall, we put out a call for nominees for the “Virtual Scouting Oscars” as a way to recognized those Scouters who went above and beyond during the pandemic.  We received well over 100 nominations!  This is the profile of one of those volunteers, Greg Bolton.

Broadcasting the Super Bowl May Have Been Easier

When you can’t go to camp, you bring the camp to the Scouts! 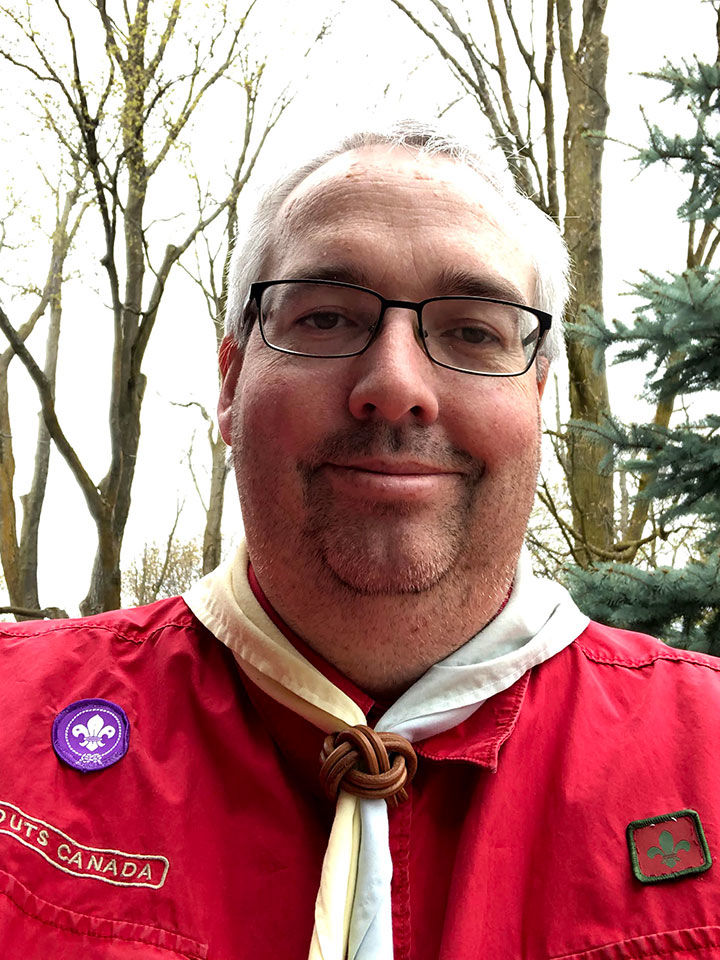 For Greg Bolton, camping is a passion. Last Spring when most of the country went into lockdown Greg, who is Group Commissioner for 1st Mount Albert in Shining Waters Council, along with other leaders did their best to keep the Pack and Troop sections meeting over Zoom. But as the warmer weather approached, they all felt something was missing; their annual Spring All-Sections Camp. With everyone feeling a bit down that they would have to cancel this year’s all-section camp, Greg decided something needed to be done.

Being from a small town, Greg knew that the whole community was struggling with the restrictions. With access to a webinar account, he proposed to the other Scouters the idea of a virtual camp, with everyone camping at home. He even suggested that the wider community also be involved as a way to have fun, engage more youth and showcase Scouting. All the Scouters were on board and things started ballooning from there.

The Scouters reached out to local businesses and farms to gain support and offered to promote them throughout the event. In response, local businesses offered pre-recorded segments that could be played during the event. Restaurants even offered socially distanced food specials if the ‘secret word’ was shared during the session. Things were taking shape and the event was getting bigger and bigger.

The overall plan was to have live and recorded segments of activities, games, Scoutcraft and Q&A, with different youth, sections and Scouters providing the various material. Part of the plan included keeping activities short to give time for people to try out their new skills. Participants would then be asked to share pictures via social media or the website.

As the day approached, a command centre was established (in Greg’s basement, of course) to ensure the day-long event would run smoothly. With a mix of recorded and live segments to manage and oversee, it felt almost akin to broadcasting the Super Bowl. One intrepid Cub Scout, Zach assisted the make-shift command centre by fashioning an 100ft ethernet cable so transmission was smooth and uninterrupted.

When the day finally arrived and the event was launched the volume of participation surpassed everyone’s expectations. Word had been building online for weeks and Scouters and participants joined from around the country and the world. Scouts from the U.S., Cuba, England and even as far away as Australia joined in on the virtual camp. The day culminated with an amazing campfire, featuring local musicians, recorded songs, skits and cheers. It was an unbelievable and memorable event.

And although Greg may have provided the initial spark of inspiration, it was truly a team effort with support from the entire 1st Mount Albert group! With special appreciation to roving reporter Scouter Mark, Camp Chief Scouter Duncan, Campfire Chief Scouter Mike, Quartermaster Mike W. and demos by Scouter Brett and Scouter Gord. And of course, all the other youth and Scouters who filled in all the gaps! It was a tremendous team effort and the true embodiment of Scouting.